We are very excited to announce that we will welcoming Her Royal Highness the Countess Of Wessex at Bendrigg Trust on Wednesday 6th February 2019.
Her Royal Highness will be launching an exciting new (and secret for now!) project and will be meeting some of our residential groups. Watch this space for more details coming soon…

18/02/19 Update : After our wonderful visit from the Countess of Wessex, we are delighted to announce that she launched our Adventure For All Project Funded by the ScottishPower Foundation! Read more about this very exciting project.

A group of plucky Playdale staff members, collectively known as the Playdale Paddlers, undertook a kayaking challenge back in July this year. Their challenge (that they chose to accept!) was to kayak the 11-mile length of Lake Windermere all in aid of Bendrigg Trust. Despite incessant rain on challenge day from beginning to end, the Paddlers not only completed the course but completely smashed their target time! They paddled the 11 miles in just three hours & twenty minutes, a truly fantastic achievement!

Recently, Bendrigg Fundraising Officer Sarah went to Playdale HQ to be presented with a cheque for the total amount raised – a phenomenal £1,428.86! You can read more about this here or for the full round up of the challenge day itself (including a wonderful video!) click here.

At Bendrigg we see the impact that a high-quality residential has on our clients every day. People discover what is truly within them – what depths of character, what powers of determination, what sense of joy. It is no exaggeration to say that for many visitors, a stay at Bendrigg can prove to be a life-changing experience for both participants and volunteers/carers/teachers alike! ‘When Joel got the Bends’ is a wonderful case study from Birmingham Phab Camps volunteer James about the importance of  perceptions and ultimately believing in yourself and others. Read the full story here.

For the original article by Holly Watson for the Kendal Chronicle please click here.

White Stuff is a well-known brand worldwide, but back in April 2014 they brought the big-name brand to the little market town of Kendal. Since the opening nearly three years ago, it has gained immense popularity amongst the locals and those a bit further afield, becoming a staple shop for the fashion-conscious residents of the Lake District.

But the shop prides itself on more than selling clothes – it is a big part of the Kendal community. The White Stuff brand builds long-term relationships with local charities all over the country through their Foundation, linking every shop with a charity and supporting them by giving funds, time and material support.

When deciding on Kendal’s charity partner, White Stuff even got Kendal residents involved with the decision, asking people to vote on who the shop’s charity should be back in March 2014. An overwhelming 86% of the vote went to Bendrigg Trust – a local charity providing adventure activities for disabled and disadvantaged people of all ages.

As part of their pledge, the White Stuff Foundation also matches any money raised by the shop for the charity, doubling each donation that Bendrigg receives. This has meant that, since the opening of the shop nearly three years ago, White Stuff Kendal have raised an incredible £15,000 for the charity, earning them the ‘Major Donor Gold Award’ for their contributions.

White Stuff regular Dawn Kirkpatrick, of Beast Banks, praised the shop for their work with the trust:

“I think it’s great how much the staff do for charity, and more shops should be doing it! It’s just another incentive for me to shop here.”

“It’s lovely to see such a recognised brand helping make such a big difference to a small local charity – even the 5p carrier bag charge doesn’t go to the company, it goes direct to the charity!”

The Kendal management team regularly send out staff to the charity’s base in Old Hutton, most recently to help with the development of Acorn House, a completely accessible accommodation unit on their site at Bendrigg Lodge, which you can read about here.

But the team does much more than just helping out around the Lodge; they regularly hold fundraisers instore and even embark on challenging tasks in order to raise money for the charity.

Last summer on behalf of White Stuff, vet student Phil McKean completed the gruelling ‘Total Warrior’ course raising funds for Bendrigg, while other staff from the shop supported him and the charity by marshalling the race.

Phil said about the experience:

“It was by far one of the hardest things I’ve ever done, but one of the most rewarding. I managed to raise £263 for Bendrigg, and I couldn’t have done it without the help from the staff at White Stuff”.

The staff themselves have also braced the adventurous side of fundraising, with two of the shops product advisors, Sarah and Sam, completing the Yorkshire Three Peaks Challenge back in October 2015, raising an amazing £455. This was then matched by the Foundation, bringing the total to £910.

Manager Emma also ran across 10 of the Lake District’s highest peaks in just 24 hours back in June 2014:

“I travelled over 73km, crossing mountains, streams and bogs, ran in the dark and made it back by 1am! The route covered 5,600m of ascent and included climbing Helvellyn, Scafell and Skiddaw to name just a dfew of the peaks. It was incredible challenging. My poor body!”

Despite the difficulty of the challenge, she says, “it was definitely worth it though – Bendrigg is a fantastic charity who are dedicated to every individual who goes there. They are a very inspirational charity and I feel privileged to be helping raise funds for such a worthy cause.”

Emma managed to raise £442 for Bendrigg, nearly double her target.

Not all the staff at the Kendal shop are able to go to such lengths for charity but they still contribute as often as they can – whether it’s the Cross Bay Walk, knitting a quilt or volunteering at the Lodge.

Bendrigg’s Fundraising and Marketing Officer Sarah Garman told me how much the Trust appreciates White Stuff’s work and support: “White Stuff have raised over £14,500 since starting to support us, and this has had a huge impact on Bendrigg. The funds go towards our core costs which are often the hardest costs to fundraise for. This can include heating, lighting, replacement of equipment, staff costs and so on.

“On average this has meant that donations from White Stuff annually have been around £4,500 – this is around 5% of our annual core cost required – an amazing amount!

“White Stuff are one of just a few corporate partners who support us, but by far donate the most to Bendrigg.”

And with the incredible amount they’ve managed to raise already, it seems like they’ll make it!

Ask any adult what their fondest memory of school is and most will come back with an exciting story about a residential trip; how they explored, played, took risks, tried new things and made new friends. At the time, you don’t realise how these experiences shape who you become later in life.

The Government are committed to making such opportunities available to everyone, no matter their background, ability or needs. In their recent white paper ‘Educational Excellence Everywhere’, the Department for Education outlined the need for every child to have experiences that equip them with “the knowledge, skills, values, character traits and experiences that will help them to navigate a rapidly changing world with confidence”.

High-quality residentials play an important part in this aim with impacts being seen immediately. The research project, Learning Away, demonstrated the impact that residential learning can have on learner engagement, achievement and relationships. They found that “a residential learning experience provides opportunities and benefits/impacts that cannot be achieved in any other educational context”. These traits not only open doors to employment and social opportunities but underpin academic success, happiness and wellbeing.

It can be argued that these benefits are even more profound and life-changing for the 0.9million children (7%) in the UK who are disabled. High-quality residentials provide “opportunities for students with disabilities to be engaged in physical activities” which is greatly needed as 86% of families with disabled children go without leisure activities. Add to this the fact that 65% of families caring for disabled children report feeling isolated frequently or all of the time and the need for truly inclusive outdoor provision is clear.

“George” (a pseudonym) was one such student for whom a brilliant residential had a profoundly positive benefit. Therry, a teacher who frequently brought students on residential courses to Bendrigg Trust, tells his story:

The youngest student we ever had with the team was an 8 year old young man, George, with cerebral palsy, epilepsy and profound visual and auditory impairments. This was to be his first time away from his family and home. He blossomed with his responses and became so smiley and noisy (to the degree of cheeky!) showing us there were ways around, through and over the barriers we previously had believed to be there in the school environment.

Once free of his wheelchair and secure in his climbing gear, George felt his way carefully up the climbing wall requiring minimal support from Bendrigg staff but making his own choices, as his fingers and feet found bumps, hollows and things to push and pull on. He was able to fly along the zip wire with happy howls of delight and his eyes, which we understood to provide him with no vision, sparkled. We know that Bendrigg worked its magic in ways no one could have imagined and we are so grateful that George was able to have this experience. I wish it was possible to bottle this ‘Bendrigg magic’ from start to finish so everyone could see, and truly believe what each individual can achieve.

“George” may be a made-up name but his story is real.

Bendrigg Trust believes in the impact that high-quality residential courses can have for young people with a disability; combining activities that they never dreamt possible with a welcoming and inclusive home-from-home. From learning to make your own bed to taking your first journey in a canoe, Bendrigg believes in giving young people skills for life, an increased motivation and appetite for learning and broadening horizons, often opening up a whole new world of opportunity.

Do you have a story about the impact outdoor learning? Comment below and let us know!

Spacekraft offer sensory solutions for special needs and are holding a sensory room open day on Friday 30th September 2016.
You and your children can come and experience the benefits of their new and improved interactive sensory environments from 10am-2pm with free activities as well as a free goody bag for every school that visits. Have a look at their flyer here.

Bendrigg were pleased to support a number of visually impaired athletes in the recent Kendal Triathlon. All athletes and their sighted guides had a wonderful time and finished with a few even taking home medals! Well done to everyone who competed and thank you to all who came out to support their amazing efforts. 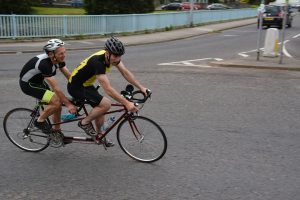 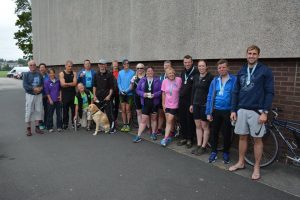 We are happy to be looking for a Senior Tutor to take over from Nick Liley following his promotion to Principal as of 1st January 2017. We are looking for someone with a wide range of activity delivery skills and qualifications who can display effective and inspirational leadership to our tutorial team. The successful candidate with have a range of NGB qualifications, with one or more at a high level, and they will have experience in working with people with disabilities. A job description can be downloaded from our Downloads page and please email trevor(at)bendrigg.org.uk for an application pack. Closing date is Friday 23rd September 2016.